The SDHI how does it work

SDHIs  are chemicals that inhibit (hence the I) a key step in the respiration of microscopic fungi. They are thus supposed to prevent the rot of various plants by blocking the development of these fungi. The stage of the targeted respiration is that provided by the succinate dehydrogenase (SDH) present in the mitochondria. But the cells of all living things breathe whether they are micro-organisms, plants, animals, or humans. This vital process is made possible by the presence in each cell of mitochondria, these “energy factories” which can be present in large numbers, up to several thousand in a single cell. They play a fundamental role in releasing the energy contained in our food (sugars, fats, proteins).

A mitochondrion of spinach leaf, observed with the help of an electron microscope magnifying here 40 000 times. 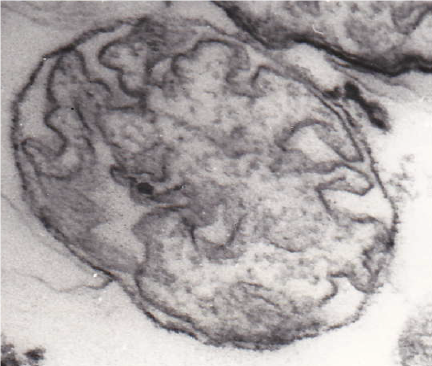 This release takes place through cellular respiration in the form of a fuel, ATP, used for the reactions of the cell that require energy, and heat, they are the ones that heat the human body. The cellular respiration is ensured by a set of proteins, the mitochondrial enzymes, of which a part united into five great large complexes – noted from I to V – constitute the respiratory chain, and which act in concert to assure a continuation of biochemical reactions. If one of these enzymes is defective, cell respiration is less well and in humans, it leads to the appearance of many very serious diseases. In this series of biochemical reactions, the enzyme SDH (also called complex II) plays a crucial role, and it has long been known that genetic mutations in SDH, leading to the loss of its activity, are the cause of human diseases.

These mutations can be, on the one hand, at the origin more or less late of severe encephalopathies, and of cardiopathies in the children. Other mutations can lead, this time much later in adults, the formation of tumors of the nervous system in the head or neck, or in the thoracic, abdominal or pelvic areas. They predispose to certain cancers of the kidney or the digestive system. Functional abnormalities of SDH are also observed in other human diseases, such as Friedreich’s ataxia, Barth’s syndrome, Huntington’s disease, Parkinson’s disease and certain asthenozoospermia (disruption of spermatozoa mobility). These data establish the essential role of this enzyme in human health.